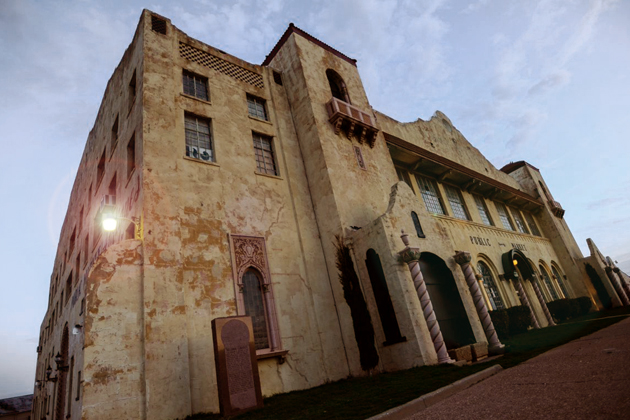 For years there had been a need for a central public market for local farmers to sell their produce. Farmers would bring their wares into Oklahoma City and sell them on the streets, creating congestion and traffic problems. The Market came about as a result of this long standing conflict between local farmers and the downtown business community. The Oklahoma City Farmers Public Market first opened its doors on June 16, 1928 on the site of the Delmar Gardens Amusement Park. John J. Harden built the two-story, 40,000 square foot structure at a cost of $500,000. The downstairs was mainly used by farmers who sold fresh produce. Upstairs there were concerts, dances, boxing matches and roller-skating.

Hank Williams Sr., Count Bassie, and Bob Wills have all played in the Auditorium. In its heyday, the building also housed a grocery store, meat market, candy store, bakery, café, and drug store.

The “fan or mall” is a twenty thousand square foot building that once wrapped around three sides of the main structure. It was divided into 9 x 18 foot stalls in order for farmers to pull their trucks or wagons in to set up shop for the day. Today this buildingis filled with an eclectic mix of shops offering anything from collectibles to fresh cut flowers.

After years of neglect, Burt and Jody McAnally purchased the six-acre property in July of 2002 from John E. Harden, grandson of the original owner.

“Our vision is to restore the Market to its former glory,” said Jody.

Restoration began in August of 2002 and will feature a redeveloped ground floor market with numerous specialty vendors, including the market, florist, bakery, and restaurant. The second floor space will be redeveloped into a grand space for special events such as boxing, musical performances, dances, and receptions.

The second floor will continue to have the largest hardwood floor in the State, and will have improvements such as elevators, new expanded restrooms, and mechanical and electrical systems. Restoration should be completed within 4 years at an estimated cost of $4 million.